I never ever imagined that one day I would attend a campaign rally in Egypt. Well, I had my first experience last Saturday and it was by a mere chance. Sandmonkey, Hani (Happy Bushra's brother), and I decided to head to downtown Cairo because Hani wanted to buy some Arabic books before returning back to the states.

We all got crammed in a Fiat 128 taxi and kept the chitchat going as the car inched through Cairo's dreadful traffic jams. We arrived at Tahrir square in downtown Cairo and told the driver to drop us in front of the mogamaa, a huge government building that houses several ministries and other governmental organizations. When we got off the cab we were all stunned to see that Ayman Noor was going to hold his final campaign rally right in the middle of Tahrir square, Cairo's most famous and busiest square. Sandmonkey's jaws dropped. Hani was drooling. And my eyes popped out.

Huge posters of Ayman Nour and Al Ghad party were all over the area allocated for the rally. A giant TV screen was placed on the pavement to broadcast the event to both vehicles and pedestrians. A young man was handing out leaflets, I took one for myself.

The place was crowded especially since the area in front of the moqama isn't that huge. My rough estimate is between 2000 to 3000 attendees including the journalists (excluding the huge number of security personnel of course!!) 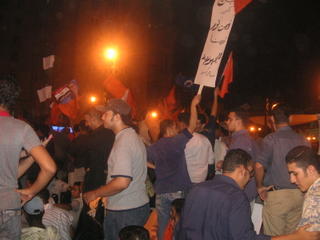 We squeezed ourselves through the throng trying to get as close as possible to the stage. People were waving flags, brandishing posters, and enjoying the new found freedom. Suddenly, a group of Al Ghad party members erupted into chants of "down Hosni Mubarak." I couldn't believe what I heard. People chanting "down Hosni Mubarak" right in downtown Cairo and right in front of a symbol of the government's huge back breaking bureaucracy, the mogamaa building!

We kept walking until we stood right underneath the right side of the stage. I was enjoying my ecstasy when Sandmonkey directed my attention to a young lady carrying a camera. "Look, she's Mona El Tahawy" he said. Mona is a New York based journalist and commentator who writes for America's top papers as well as Al Sharq Al Awsat, a reputed pan-Arab daily newspaper. "Mona, Mona" I hollered. Sandmoney and I approached her and he revealed our personalities to a friend whom we only knew through the internet.

I got introduced to several other journalists, most of them knew about our blogs. Among them was Brian Whitaker from the Guardian who wrote an article on the anti-terror protest we organized after the Sharm bombings and Charles and Josh from the Arabist.net. I felt so humbled when several journalists asked to know my feedback on what was happening. They also didn't miss the ever informative Sandmonkey who was glad to speak his mind.

Exhausted from the heat, we went to get some water from across the street. There were police trucks parked at a distance and we later knew from a police officer that they had orders not to interfere with the rally. I really felt pity for all these poor soldiers crammed like sardines in those awful vehicles. 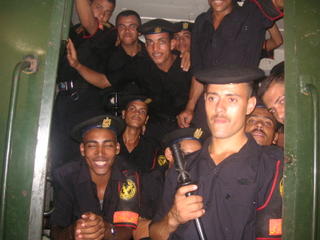 I approached the above police truck and asked the soldier if I could hold the black baton. He refused and told me the word we always hear from the police and other authorities: "mamnouaa" or forbidden. I then extended my hands and started feeling it. It was made of hard rubber. "It's very good in hitting" he told me.

We returned to the convention. 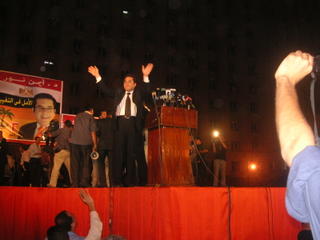 Suddenly I saw young men rushing towards a person whom I immediately figured out to be Ayman Noor. The throng around him were chanting "here is the president", "where is the media, here is is the president". Nour stood at the podium and started delivering his speech. I don't know why but I felt that Nour lacked the charisma of an opposition figure who says he wants to change everything. His tone was low and rather weak. I am not sure if that was because he was exhausted from the tens of conventions he held around the country.

Anyway, that convention or campaign rally will never get erased from my memory. It was a clear indication that something is definitely changing in Egypt. My hope is that this spring, no matter how limited it is, will continue and give birth to liberal and progressive entities throughout the coming years. The secular/liberal/progressive entities of Egypt are in deep disarray and weakness and they will never gain strength unless given the freedom to operate and reach out to the masses. I am still at my stand that Mubarak should be given a 5th term, but I definitely welcome such political boat rocking.

Despite all the good things about this convention, there was still a negative thing that made me very upset. There were no balloons like the ones I saw in the Republican and Democratic conventions in the US!!