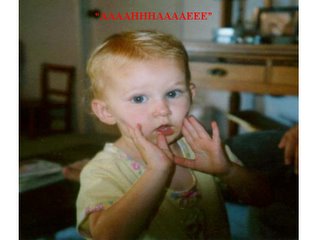 That's what I have been saying yesterday after knowing some results of the first stage of the parliament elections. "A7e" is pronounced as "Aahe. The "7" sounds like a strong H and this letter is not found in the English alphabet. "A7e" means "darn" or "damn", you say it when you hear something you don't like. There is another 3 letter word but its a bit obscene, let us be polite on this blog!

So why was I saying "A7e" or "Aahe"? Because the Muslim Brotherhood managed to win unexpected seats yesterday in Cairo. And guess what? They even won in my area! They are not expected to take over the parliament, but in yesterday's "medium free" elections, the MB are expected to double if not triple their seats in parliament after stage 2 and stage 3.

Another big surprise was the loss of Ayman Nour in his own district! He lost to a member of the National Democratic Party (Mubarak's party). I am not sure what effect will that have on his newly formed party, we'll have to wait and see. Also, Mounir Abdoul Nour, one of Al Wafd's heavyweight lost as well. 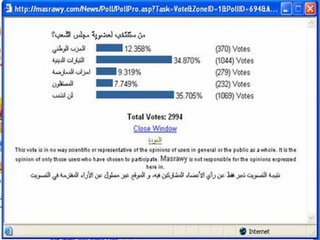 Q: Who will you vote for in the parliament elections:

Well, I consider myself to be a victim of democracy's spread in the "wider Middle East", this is why I am now 100% positive that I need a Plan B if the shit hits the fan in my homeland. I cannot continue living peacefully in the midst of my compatriots' religious fantasies. I know very well that my compatriots have to taste the MB one day or another, but I am sorry to say that I am not willing to go through this experiment.

I am currently in the process of convincing my family of emigration. This is our Plan B.

So, take a deep breath ladies and gentlemen and say after me: AAAAHHHHEEEAAAAAA

Now, what do these elections tell us? They show that the government wanted to convey to the world, and especially the US, that it held a free parliament elections. "See, the Muslim Brotherhood, our main and probably only viable opposition, won a good number of seats, we held free elections as you demanded Mr. Bush." That might be the sentence Mubarak will tell Bush during their next telephone conversation.

There was a clear sense of facilitation and alliance between the ruling NDP and the MB. The MB enjoyed stuff they never had in a very long time. They were free to hold street rallies, fill Egypt with their original posters, and use their controversial slogan "Islam is the solution". Only a stupid person will say that there wasn't some sort of cooperation between the 2 rivals.

Nevertheless, I am not claiming that Cairo wil turn into a Kandahar tomorrow. However, we can anticipate a number of crazy laws to be passed through the coming parliament. In addition, political Islam has definitely entered the official political life of Egypt. Thanks to the government.

Today I had this conversation with the technician of our company.

BP: Hey, you heard the results?
T: No
BP: the MB won big gains. Their guy in our area won as well. We will get screwed.
T: Great..let them fix the country. I hope this guy fix it.
BP: I am telling you we will get screwed.
T: No..they are people of Allah. May Allah bless them.
BP: People of Allah??? These guys use religion for their political objectives.
T: Don't say this Sir. I am very upset with you now. May Allah reward them for their work.

And he left the room.

Well, the problem is that we are currently witnessing a religious tsunami in Egypt. The current economic situation and the political stagnation is leading people towards religion and so they are more opt to believe any candidate who will quote a verse or two out of the Quran. We are the exact opposite of Iran. In Iran, the youth there are running away from religion even though they are facing the same poverty and stagnation we're in. The Iranian youth are running away because religion is ruling them and its doing a shitty job.

Now, my technician needs to taste the full rule of the MB. The problem is, I'm not willing to wait till Mr. Technician get convinced that mixing religion with politics is like mixing strawberry jam with mashed potatoe. 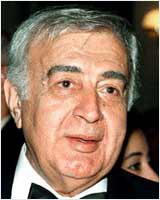 On a different note. World renowned Syrian born director Moustafa El Aqad was seriously injured in the terrorist attack in Amman, Jordan yesterday. Among Aqad's most famous works is The Message and Lion of the Desert. Both movies starring Anthony Queen.