Egyptian blogger Abdolkarim Nabil Seliman who runs the blog Kareem Amer was arrested on October 26h from his home. According to his family, his arrest might be a result of his writings. His brother said that Abdolkarim has a tense relation with Islamists in his hometown of Alexandria. He added that the Islamists might be the ones behind filing a complaint against his brother.

I didn't know Abdolkarim's blog before. I visited it and discovered something very strange. Abdulkarim apparently comes from a Muslim background (he has a Muslim name) yet his writings contains remarks that attack Islam. His writings drew many negative comments on his blog.

Abdolkarim could be a convert to Christianity or someone who left the Muslim faith, and I was stunned when I saw that he posted his picture on his blog. Anyway, he will be in a very serious situation if a case was levied against him. If sent to court, the charge of "izderaa el adyaan" or "blaspheming religion" can be applied leading to his imprisonment.

Here is a report from the Jerusalem Post. And another comprehensive story from the Associated Press:

"It is the first security crackdown on an Egyptian blogger, a growing community that has flourished in Egypt over the last couple of years. " 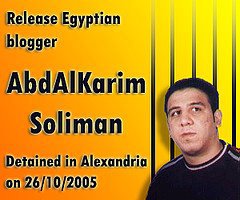 Update: Committee to Protect Bloggers has updates here. Up till now, as far as I know, only the Jerusalem Post and the AP reported this story.