The 10 Commandments
Yesterday night I had a very strange experience. I was on bed and I suddenly saw my PC on fire. 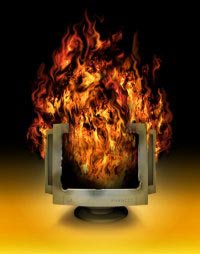 A voice came out of the fire telling me “The Big Pharaoh, I am Allah, I chose you to carry a message to my beloved Muslims. I know they are not happy with how they are looked upon internationally and especially in the Western world. I know they are trying to find ways in order to remedy that and this is why I will give you 10 commandments to post on your blog. I just hope they listen to me”

1.Thou shall not have westophobia. The west is not plotting against Islam, they don’t give a hoot about your religion nor the religion of this old Hindu man walking in downtown Calcutta, India. The West is busy with far more important things.

2.Thou shall remember that millions of Muslims in Europe have far more rights than non-Muslims in Arab/Muslim lands (for more info, contact the Christian villagers of el-Udaysaat) So quit playing the victim here. I simply don’t buy it.

3.Thou shall understand that the West is a pool of ideas and people. In the west you will find: Non-muslims who love Islam (Karen Armstrong and Prince Charles), non-Muslims who hate Islam (J-Posten and Oriana Fallaci), converts to Islam who love Islam (Murad Huffman, Roge Garoudi), converts out of Islam who hate Islam (Hirshi Ali and Ibn Warraq). So for heaven’s sake, you can’t paint the West with one brush.

4.Thou shall understand that the West gets their info on Islam not from your preaching nor from the books you translate to them but from your actions.

5.Thou shall riot and protest when Muslims kill other Muslims (for more info, contact the Shia families of Iraq and Darfur Sudanese)

8.Thou shall not boycott an entire nation because a single newspaper, TV channel, radio station, politician, actor, actress, etc, etc, in that nation said or wrote or drew something that offended you. Why? Because its stupid and childish to do so and it further hurts your image.

9.Thou shall incorporate the values of liberal democracy. The Catholics of Italy, the Anglicans of England, the Buddhists of Korea, and the Shintos of Japan have done so. I don’t see a reason why you can’t do so as well.