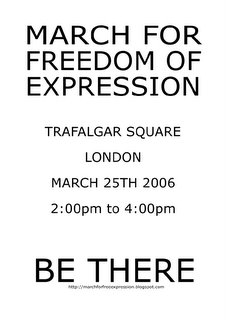 People in the UK, don't forget the march for free expression tomorrow March 25th in Trafalgar Square between 2:00pm and 4:00pm.

From what I've read so far on the organizers' blog, it seems the march got a lot of recognition and it seems Saturday will be a big day.

The march was endorsed by Baroness Cox of Queensbury as well as by a decendent of the prophet Muhammed, Sayyida Rend Shakir Al-Hadithi.

What really caught my attention was the organizer's frantic effort to seperate the march from any anti-Muslim entities as well as their attempt to draw as many Muslims as possible to Trafalgar Square on Saturday. This is the reason why they are urging people not to bring the J-Posten cartoons with them.

At the very start of this campaign, we said this is a march in support of freedom of expression, not a march against Muslims. We meant it. But there has been a lot of mistrust about this from Muslims, and some disappointment from those who would like to use it to attack all followers of Islam. The latter is of no consequence to us; the former is a great concern.

In practice, Muslims who wholeheartedly endorse our statement of principle, as quoted below by Peter Tatchell in his superb essay, who abhor the threats made against Danish cartoonists and believe people should have the right to publish things they themselves find offensive or abhorrent would be UNABLE to come to our rally on Saturday, because to be surrounded by these cartoons, now, in the present context when the BNP are using them as a rallying point, would be intolerable.

So I now appeal to people not to bring the cartoons on T-shirts or placards.

Instead, because the principle of free expression must be upheld in this context as well, we will arrange a forum in which they can be seen and debated without this being, in context, intimidating to anyone.

The principle of freedom of expression is used, by some, as a trojan horse, as a proxy for racism and islamophobia. Not by me. Not by us. Not by this campaign.

Of course groups such as the Muslim Action Committee condemned the march and will organize their own counter marches. My biggest fear is that British Muslims will blindly join the counter marches without paying much attention at how the Trafalgar march people are doing everything they can to accomodate Muslims and encourage them to join. And by siding with the counter marches, it will only be another missed opportunity by the Muslims and another time to be on the wrong side.